Adventure tourism in Saharan areas is the spearhead of receptive tourism

Located in North Africa, Algeria has a variety of reliefs: a coastline, plateaus and mountains and a desert, offering a paradisiacal landscape. Its Mediterranean climate in the north, semi-arid in the plateaus and Saharan in the south, makes it the tourist destination par excellence! The participation in MITT Moscow this year is an opportunity to highlight the different advantages of the destination, in order to better place our tourism product on international markets, Algeria has several product, The Algerian south is considered as an invaluable tourist wealth. It is also a lot of cultural and historical aspects and a moment of meeting with oneself, of rest and questioning.

Adventure tourism in Saharan areas is the spearhead of receptive tourism. The aim of the DMO is to turn the Sahara into the greatest international attraction of discovery tourism, but only on the condition of putting in place the necessary mechanisms to preserve any form of alteration or degradation following uncontrolled tourism.

With the aim of further promoting the destination Algeria, a strategy has been put in place to optimise inbound tourism in the post-Covid era. Faced with the dramatic financial consequences of the pandemic, an operational steering committee for the resumption of activities has been created, bringing together all the players in the tourism chain.

The Seaside Enthralling Sea Mediterranean Algeria reveals the charms of its blue sea with the most beautiful effect. Bays with breathtaking beauty, wild coves and sea mountain landscapes captivate you from the first glance. Fine sand and pebble beaches with a series of coves attract the eye all along the 1200 kilometres of coastline, and if you are a seabed lover, you will have the opportunity to discover the islands of Habibas, Rechgoune, the beaches of Bejaia and Jijel, the bay of Chetaibi or the coast of Chenoua.

Over twelve hundred kilometres, the Mediterranean Sea displays its beguilling charms. A permanent invitation to discover places of incomparable beauty from El Kala to Marsa Ben M'hidi, the Algerian coast is also rich in less known but equally interesting places for their splendour, where the sea and the mountain meet in fairy-tale landscapes. For the pleasure of swimming, holidaymakers will find captivating sites, such as El Kala with its turquoise and coral red waters, the appropriate places for relaxation and escape.

Algeria, the most beautiful desert in the world: The Sahara. Escape and change of scenery. 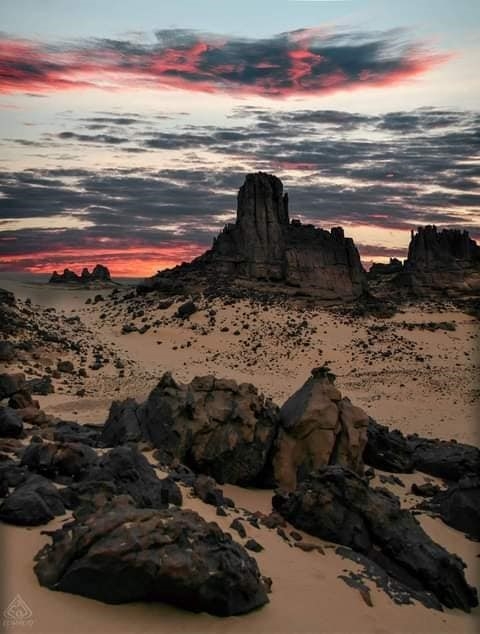 We have to take advantage of the opportunity we have to present to our local and international visitors the multiple facets of the touristic heritage of the Algerian south. More and more; via a political promotion targeted in the roaming of the interruption, the reunion (méharées, trekking, bivouacs, raids, climbs, dune marathon, sand sky); the eco-tourists discovering via the immersion in the cultural identities; the knowing of the traditional craft industry and of the material and immaterial patrimony( foggaras; cave engraving; domestics parties; music and dancing instruments).

In Algeria, you can easily get out of a swim and straight away climb white-capped mountains. Indeed, Algeria is distinguished by many mountain ranges, stretching from north to south, with winter resorts, national parks and snow-covered peaks. You will have the opportunity to discover the resort of Chrea and its forests as well as those of Tikjda, in the Djurdjura, and Mount Lalla Khadidja.

Further east, Mount Chelia, with its gorges and passes, offers a breathtaking landscape. The stepped descent of the Balconies of Ghoufi, just like the naturally formed canyons, carries us to another dimension. Such mountains, steeped in history with outstanding flora and fauna, are also found in many other parts of the country, like the Beni Chougrane or the Traras ranges in the West, and the Mount Babors, the Bibans with Kherrata canyons and the famous iron gates, the N'memcha and the Edough, in the East.

Hydrotherapy is another tourist asset of a special kind that blends wonderfully the seaside dimension with the rural aspect.

More than two hundred thermal springs known for their healing qualities have been listed in Algeria. Thirty-six spas have been recognized at the local level, fifty-five at the regional level and eleven at the world level. There are numerous spas or Hammams in the northern part of the country.

Kasbah of Algiers The Heart of the City

The Kasbah, a historical medina, is the beating heart of Algiers. Overlooking the majestic bay of Algiers, it is a UNESCO World Heritage Site. A city in the city, the Kasbah reflects the History of Algiers, with valuable cultural treasures and Islamic architecture typical of Arab Moorish medinas. Its urban planning that bears a Berber imprint, inherited from the Zirid era, gives it a character both authentic and multicultural.

Conceived as a citadel, it was transformed into a picturesque city, known for its whitewashed houses, jasmine flower districts and traditional cafes. Its terraces descending down to the Mediterranean offer a breathtaking view of the bay. It is an area where you can find Turkish baths, mosques and various souks, or bazaars, alongside craft shops. The unique architecture that combines Arab-Moorish and Ottoman styles can be admired in traditional houses with their porticoes, patios and wooden balustrades.

The palaces of Khdaoudj El Amia, Mustapha Pasha and the Dey, dating back to the Ottoman era, reveal the Islamic architectural art in all its splendour. A visit to these places full of History tells you about the art of living in that time and the richness and beauty of the materials used; Among the numerous spiritual sites of the city, The Ketchaoua Mosque remains a unique work. It combines Turkish and Byzantine styles, its architecture having been altered during the Regency era. The Kasbah had five gates Bab El Oued, Bab Ejdid, Bab Dzira, Bab Azzoun and Bab El Bahr.

From both the historical and the geographical point of views, Algeria is a captivating country. Through its historical remains, it is the mirror of universality. Djemila, a few kilometers from the city of Setif, is an invaluable treasure. The ancient Cuicul is indeed one of the most beautiful Roman cities in Numidian land. Timgad, or Thamugadi, a few kilometres from Batna, is the most important ancient city. The ruins of Theveste (Tebessa) are further south, about a hundred kilometers from Souk Ahras.

Madaure or M'daourouch was known to be the intellectual center of Numidia. Famous for its schools, it was visited by St. Augustine, the Numidian who became the father of Roman Catholicism. The ancient Caesarea (Cherchell), at the foot of Mount Chenoua, is blessed by a spectacular combination of sea and sun. Those in the thermal baths of Trajan, Timgad and the solar mosaic of Constantine are the most beautiful. This art became especially famous in Cherchell where developed the "mosaic of the fields.