Get your ticket Book your Stand

From 16 to 18 March, the 27th International travel and tourist trade show MITT took place. Organized by Hyve Group, for the first time the show was held at Crocus Expo, to a great success.

MITT is one of the five largest travel exhibitions in the world, and it has always been highly appreciated by the international community.

In 2021, MITT for the first time deployed its exposition at Crocus Expo, showcasing 611 participants from 28 countries of the world and 52 regions of Russia. Over the three days of its operation, the exhibition was visited by 10,446 tourism industry specialists from 51 countries and 80 regions of Russia, and the visitor density tripled compared to 2019.

After long lockdowns and difficult times for the tourism industry, long-awaited meetings of the travel industry, new business acquaintances and networking took place at MITT. The activity at stands was complemented by creative presentations of topical tourism products, for added national flavor. 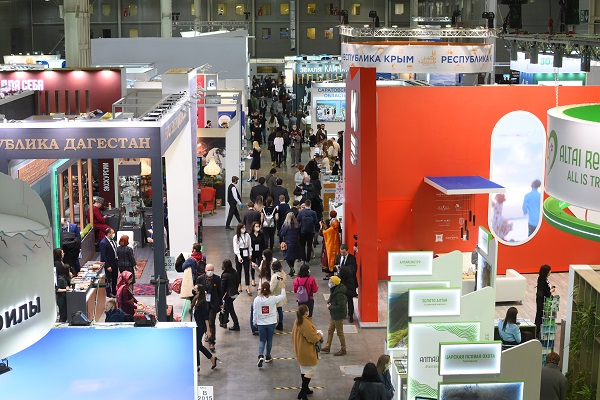 A separate exhibition hall was dedicated to the exposition of the Russian regions. During the last year, the tourist flow to the regions significantly increased, which could not but affect the Russian exhibitors. For example, the Altai Republic has increased its stand almost 4 times. Only at MITT, the Far Eastern Federal District was represented by several stands: the Republic of Buryatia, Kamchatka, and Primorsky Territories; the Republic of Sakha (Yakutia), the Sakhalin Region, as well as the Trans-Baikal Territory, which participated in MITT for the first time. The Irkutsk Region showcased leisure options on Lake Baikal, and Norilsk and Yamalo-Nenets Autonomous Okrug introduced the visitors to Arctic tourism. The North Caucasian Federal District was represented by the Chechen Republic, the Republic of Dagestan, Kabardino-Balkaria, Karachay-Cherkessia, North Ossetia and the Stavropol Territory. Tyumen, Voronezh, Kursk, Nizhny Novgorod, Oryol, Kaluga, Tula, Novgorod, Magadan, Ryazan, Ulyanovsk, Samara, Saratov, Ivanovsk, Bryansk, Omsk, Volgograd and Kaliningrad regions, Tatarstan, Adygea, Karelia and the Komi Republic; Krasnodar and Perm Territories, Rostov Region and Rostov-on-Don, Moscow Region, Moscow, and others also presented their products and tourist routes. 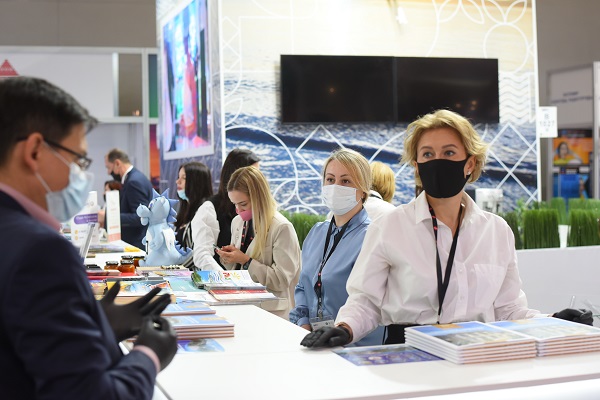 The exhibition aroused great interest at the state and interstate levels. Rostourism held a two-day All-Russian meeting on tourism at the MITT site. In addition to this, agreements with the Russian Union of Travel Industry, a meeting of the Russian-Turkish Working Group on tourism and a round table of Rostourism with ANTOR took place.

On 16 March, the official opening ceremony of MITT was attended by foreign delegations, official representatives of state bodies of Russia, management of large companies, and heads of travel associations. Head of the Federal Agency for Tourism Zarina Doguzova gave a welcoming speech at the official opening ceremony of the exhibition, highlighting the importance of MITT as an event that allows industry professionals to meet in person after a long period of pandemic. Zarina Valerievna emphasized that MITT 2021 was the first largest tourism event in the Eurasian area to take place in the post-pandemic period. 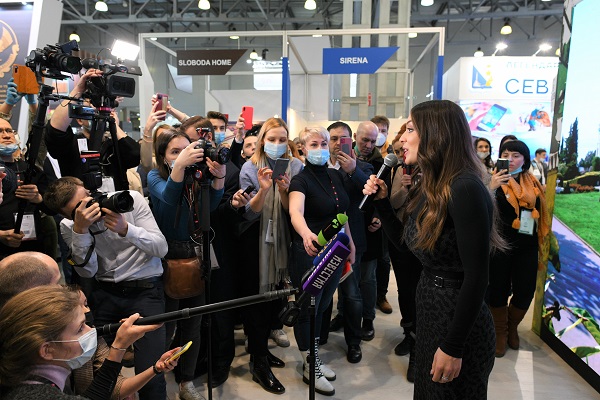 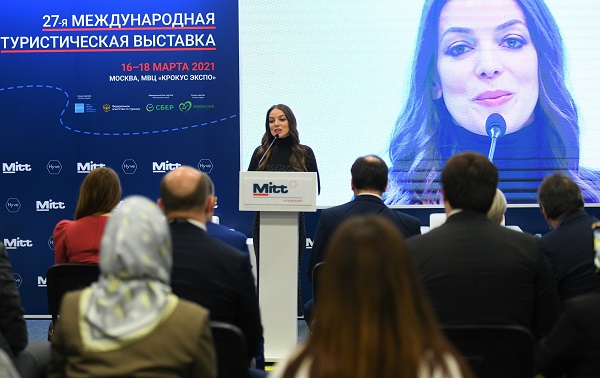 Despite the pandemic, foreign and Russian exhibitors showed great interest in the exhibition, prepared in advance, and paid special attention to additional promotion of their regions and countries. Exhibitors from all over the world presented their tourism opportunities at their stands. Greece was the partner country of MITT 2021. Turkey demonstrated tourism products at the largest stand of the exhibition, Altai Krai became the partner region of the exhibition for the seventh time.

For the first time Sber became the official bank partner of the exhibition; its representatives took part in the MITT business programme, and on the first day of the exhibition, Sber and LABTI held a solemn signing of an agreement on cooperation in tourism development. The parties intend to promote the integrated development of domestic tourism in Russia, including within the Strategy for the development of tourism in the Russian Federation for the period up to 2035, as well as profile strategies and programmes at the level of the constituent entities of the Russian Federation, by creating conditions for the formation and promotion of a high-quality and competitive tourist product, strengthening the social and economic role of tourism and ensuring the availability of tourist services, recreation and health improvement for the citizens of the country.

The general partner of MITT was the Italian National Agency for Tourism (ENIT); Official tour operator TUI; the partner of the awards ceremony Fancy Armor.
At MITT 2021, special attention was paid to domestic tourism and regional expositions. 52 regions of Russia showcased their tourism products to professional visitors, including the Republic of Sakha (Yakutia), Tyva, Komi, and Regions: Omsk, Volgograd, Samara, Saratov, Ivanovsk, Bryansk, as well as Trans-Baikal and Perm Territories, exhibiting at MITT for the first time. 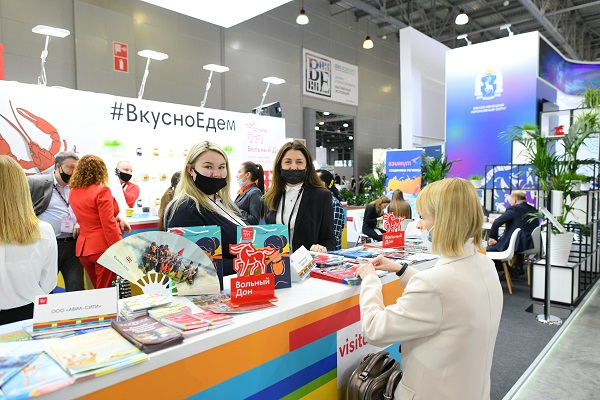 On 17 March, long-term exhibitors and debutants of MITT 2021 were recognized with prizes and gifts at the solemn awarding ceremony. Thus, Primorsky Krai was awarded active participation, Best stand — Krasnaya Polyana resort, Best city presentation — Alma-Ata, For loyalty and constancy — Art Tour (the company took part in the exhibition for the 27th time), Best presentation of a regional tourist destination —the Republic of Crimea, Best presentation — the Voronezh region, Bright debut — the Samara region, Best stand of the Russian region — the Rostov region, Partner of the year — the Altai Krai, Best collective exposition — the Republic of Buryatia, the Irkutsk region, and the city of Irkutsk. The stand of the Republic of Dagestan was awarded for the most colorful performance. Sheremetyevo VIP stand was awarded for the most creative design. Among the foreign exhibitors, the awards were received by: Bright Exhibiting Award — Greece, For loyalty and faithfulness — Saxony, Largest Stand Award — Turkey, Country Presentation Award — Bulgaria, Island Presentation Award — Maldives, Most Welcoming Stand — Israel, Best Newcomer — Nicaragua. 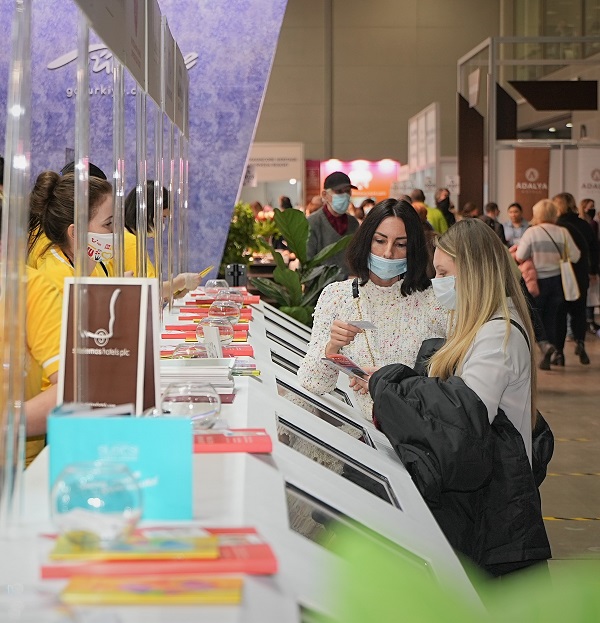 Start-up and video competitions at the exhibition

On 18 March at MITT, with the support of the Russian Union of Travel Industry, the final of the MITT TRAVEL START Startup Competition in the field of tourism and hospitality took place.

Companies developing new technology products, online travel services and other companies with new business models were invited to participate in the competition. Projects in all segments of the industry, at all stages of development, from idea to scaling, were accepted for consideration. According to the results of the qualifying round, more than 150 applications were received; 7 finalists entered the short-list, presenting their projects at the panel of experts. The three finalists included the products of TeamJet, a cloud-based system for automating staff work and monitoring the execution of operational processes for hotels and other accommodation facilities, Everydayhotel, a channel for selling rooms in hotels at DayUse and hourly rates, focused on local residents, and Movista, a multimodal OTA offering a long-distance communication by any means of transport or their combination, issuing a ticket in one transaction. The winner of the MITT TRAVEL START Competition became the project of Movista, which was awarded not only the honorary awards, but also 1 million rubles for further development from the partner of the Competition, an international entrepreneur in the field of tourism, publisher of the Think Travel Tech information portal (London) Mikhail Ignatiev. 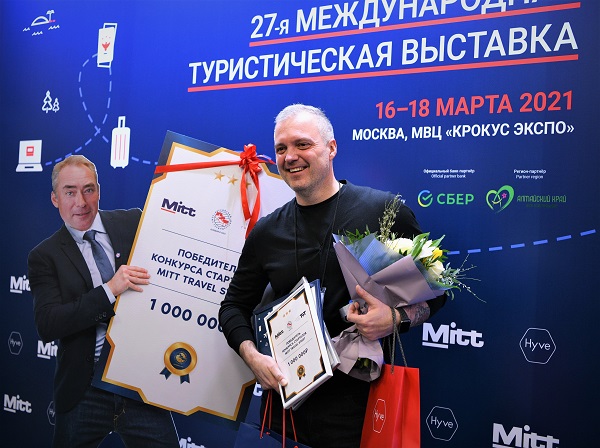 Competition of video clips by Russian regions became a tradition at MITT. Every year the exhibitor regions submit copyright videos to a vote, and visitors to the exhibition website vote for the best of the best. In 2021, the video of the Sakhalin Region was recognized as the winner, the Republic of Tyva took the second prize, and the Tyumen Region the third.

The MITT business programme is renowned for its scale and quality of events. This year, more than 20 specialized events were held within the framework of the exhibition: from practical seminars to panel discussions, from foresight workshops to case parades. In just 3 days of the exhibition, 1,639 specialists attended the business programme events.

The key event of the exhibition was the First Forum of Tourism Industry Leaders.

The second key plenary session was focused around domestic tourism development. During the session, representatives of Sberbank and Profi.travel shared high-quality analytical data on the distribution of domestic tourist flows and the influence of various factors on the growth of the attractiveness of tourist destinations. After that, representatives of tourism administrations shared their successful practices in the development of tourism potential in the regions. In total, 5 best cases were presented. The event was co-organized by the Agency for Strategic Initiatives (ASI).

On 17 March, the Forum was continued by the foresight workshop “Travel business in Russia. How will the market change influenced by global trends” The session brought together the leading visionaries of the industry, who gave practical recommendations on how the tourism business should develop in the new reality. The special guest of the event was Mikhail Khazin, a well-known Russian economist and publicist. The event was co-organized by the Internet portal Tourdom.ru.

The next plenary session was dedicated to the legislative regulation of the industry. During the session “Government regulation of tourism in Russia. What should business expect in 2021?” legal experts, representatives of government agencies and public figures spoke about the development of a new law on tourism, the implementation of the national project “Tourism and Hospitality” and how businesses can use the opportunities that open up in connection with new approaches to the development and government regulation of tourism in Russia.

The second day closed with the Focus session “Russian tourist ver.2021. What and how to sell to modern travelers”, during which analysts from Ipsos, Sber, and Google shared the results of exclusive research on how the preferences of modern tourists were changing and what products would be in demand among customers in the future.

On 18 March, the travel-caseourium “Atop the waves. Tourism business adaptation in the new reality” took place. Companies representatives spoke about the experience of business development in a crisis. The event was co-organized by the Radio Travel community.

One of the most anticipated and popular events among travel agents was the MITT Academy educational programme. For three days, seminars and master classes were held on key tracks: “Managing a travel agency”, “Effective marketing”, and “Advanced sales technologies”. The co-organizers of the events were the project travel-marketing.ru and Madison Consult. 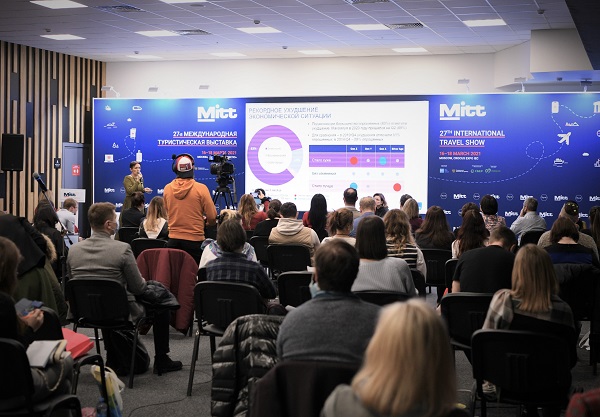 The top draw of the business programme, MITT Digital conference traditionally was a full house. In the post-pandemic period, online business development will be a key success factor. This explains the great demand for the topic among tourism industry specialists and the attention to the event of representatives of leading companies: Yandex, Amadeus, TCH, Level.Travel, Sletat.ru, and others. The conference partners were Bronevik.com, B2B.Ostrovok.ru, DISCOVER CARS, and Tezeks. Assol.Cloud became a partner of the session “Technologies and products of startups for hoteliers”. The conference was co-organized by the Travel Startups community and the TravelHub conference.

Another key event was MITT MICE. The educational program of the conference brought together representatives of suppliers and buyers of MICE services. In 2021, in addition to participating in discussions, visitors also got the chance to choose the best hybrid project born of the pandemic, after presenting several contenders in the PechaKucha format. The event was co-organized by MICE Orchestra. The partners of the event were Baltma Tours DMC, Let me speak, and MICE TV.

MITT organizers paid special attention to the health & safety of exhibitors and visitors. At the MITT site, all the requirements of Rospotrebnadzor and UFI were observed. Arrival, access and registration procedures for exhibitors, contractors and visitors were non-contact. Hand cleaners were available in regular washrooms, and additional hand hygiene products were provided at business venues, hall entrances, and all high traffic areas. The exhibition area was cleaned daily, and the premises were disinfected several times a day. All visitors were screened for body temperature at the pavilion entrances.

The exhibition was organized by Hyve, global next generation event organizer. The company was founded in 1991 in London and since then has gained an impeccable reputation both in Russia and in the international exhibition services market.

In 2022 the 28th International travel show MITT will take place on 15-17 March at Crocus Expo. 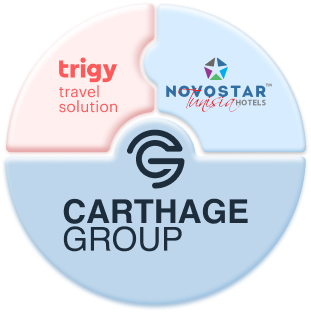